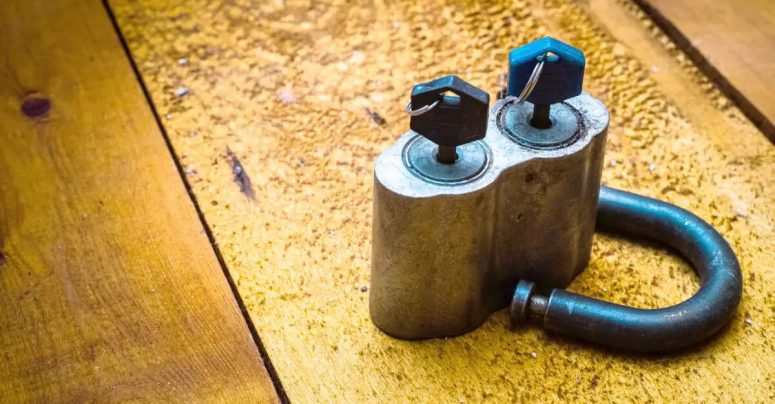 There’s been a bit of a kerfuffle in the technology media over the past few days about whether the venerable public-key cryptosystem known as RSA might soon be crackable.

RSA, as you probably know, is short for Rivest-Shamir-Adleman, the three cryptographers who devised what turned into an astonishingly useful and long-lived encryption system by means of which two people can communicate securely…

…without meeting up first to agree on a secret encryption key.

Very simply put, RSA has not one key, like a traditional door lock, but two different keys, one for locking the door and the other for unlocking it.

You can fairly quickly generate a pair of one-to-lock and the-other-to-unlock keys, but given only one of them, you can’t figure out what the other one looks like.

So, you designate one of them as your “public key”, which you share with the world, and you keep the other as your “private key”.

This means that anyone who wants to send you a private message can lock it up with your public key, but (assuming that you really do treat your private key as private), only you can unlock it.

Working the other way around, someone who wants you to prove your identity can send you a message, and ask you to lock it up with your private key and send it back.

If your public key correctly unlocks it, then they have some reason to think you’re who you say.

We’re ignoring here the issues of how you ensure that a public key really belongs to the person you think, what you do if you realise your private key has been stolen, and numerous other operational complexities. The big deal is that RSA introduced a two-key system where one key can’t be worked out from the other, in contrast to the traditional one-key system, with the same key to lock and unlock your secrets, that had been in use for centuries.

You’ll see this sort of process variously referred to as as public-key cryptography, public-private encryption, or asymmetric enccryption (symmetric enryption, such as AES, is where the same key is used for locking and unlocking your data).

In fact, if you really know your cryptographic history, you might even have heard it called by the curious name of non-secret encryption (NSE), because cryptographers in the UK had come up with a similar idea some years earlier that R, S and A, but in what turned out to be a massively missed opportunity, the British government decided to suppress the discovery, and not to develop or even publish the process.

Even though there are alternatives to RSA these days which let you have smaller public and private keys, and which are based on algorithms that run faster, RSA is still widely used, and there’s still a lot of potentially crackable data sitting around in archives, logfiles and network captures that was protected by RSA when it was transmitted.

In other words, if RSA turns out to be easily crackable (for some senses of easily, at least), for example because a Big Fast Quantum Computer comes along, we would have reasonable cause for concern.

In RSA, everyone knows the number you get when you multiply those numbers together (called the product), but only the person who originally came up with the starting numbers knows how the product was created – the factors together essentially form their private key.

So, if you could split the product back into its unique pair of prime factors (as they are known), you’d be able to crack that person’s encryption.

The thing is that if your initial prime numbers are big enough (these days, 1024 bits each, or more, for a product of 2048 bits, or more), you just won’t have enough computing power to prise the product apart.

Unless you can make, buy or rent a powerful enough quantum computer, that is.

Apparently, the biggest prime product yet factored by a quantum computer is just 249919 (491 x 509), which my eight-year old laptop can handle conventionally, including the time taken to load the program and print the answer, in a time so short that the answer is variously reported as being 0 milliseconds or 1 millisecond.

And, as the Chinese researchers report, the standard ways of approaching RSA cracking with a quantum computer would require millions of so called qubits (quantum computer type bits), where the biggest such computer known today has just over 400 qubits.

As you can see, if RSA-2048 needs millions of qubits to break, you need loads more qubits than there are bits in the number you want to factor.

But the researchers suggest that they have may have found a way of optimising the cracking process so it requires not just fewer than a million qubits, but even fewer qubits than the number of bits in the number you’re trying to crack:

We estimate that a quantum circuit with 372 physical qubits and a depth of thousands is necessary to challenge RSA-2048 using our algorithm. Our study shows great promise in expediting the application of current noisy quantum computers, and paves the way to factor large integers of realistic cryptographic significance.

The burning question is…

If we already have computers with 100s of qubits, is the end of RSA-2048 indeed just round the corner?

We just don’t have the mathematical expertise to tell you – their 32-page paper isn’t for the faint-hearted or even for the mathematical generalist – but the consensus, for now at least, seems to be…

Nevertheless, this is a great time to be thinking about how ready you are for any encryption or hashing algorithm suddenly to be found wanting, whether for quantum reasons or not.

ICO Offers Data Protection Advice to SMBs
Hybrid play: Leveling the playing field in online video gaming and beyond
5 valuable skills your children can learn by playing video games
S3 Ep119: Breaches, patches, leaks and tweaks! [Audio + Text]
Are you in control of your personal data? – Week in security with Tony Anscombe