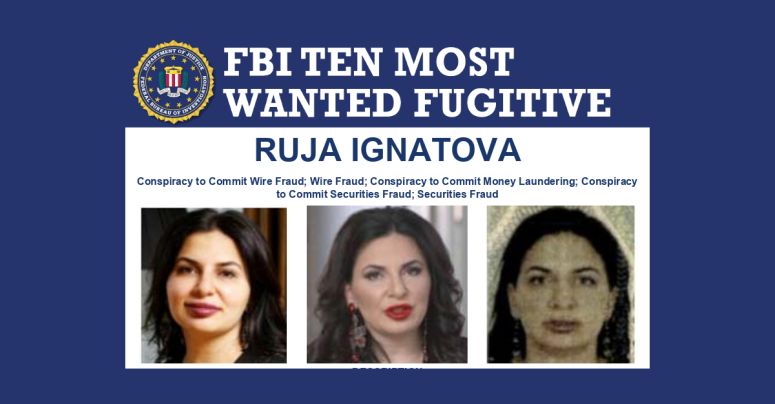 The US Federal Bureau of Investigation (FBI) famously maintains a Ten Most Wanted Fugitives list.

Currently, nine of them are men, suspected of 22 different offences between them:

One of them, however, newly added and the only woman on the list, breaks the mould.

According to the FBI, Ruja Ignatova, widely known as the Cryptoqueen, and famously dubbed the “Missing Cryptoqueen” by the makers of a popular BBC podcast series:

…is wanted for her alleged participation in a large-scale fraud scheme. Beginning in approximately 2014, Ignatova and others are alleged to have defrauded billions of dollars from investors all over the world. Ignatova was the founder of OneCoin Ltd., a Bulgaria-based company that marketed a purported cryptocurrency. In order to execute the scheme, Ignatova allegedly made false statements and representations to individuals in order to solicit investments in OneCoin. She allegedly instructed victims to transmit investment funds to OneCoin accounts in order to purchase OneCoin packages, causing victims to send wire transfers representing these investments. Throughout the scheme, OneCoin is believed to have defrauded victims out of more than $4 billion.

Do not adjust your screen

You read that correctly.

OneCoin, supposedly a BitCoin-like cryptocurrency, is said to have attracted more than $4,000,000,000 that was paid in by investors who were seduced by the chance of getting in on the ground floor of another Bitcoin-like value surge.

For all that the media is currently full of “Bitcoin and its crypto-friends are in meltdown” stories, anyone who still has a bunch of bitcoins left over from the early 2010s is nevertheless sitting on a fortune.

Back in 2010, for example, a user going by the name SmokeTooMuch allegedly owned 10,000 bitcoins.

If SmokeTooMuch never did sell those coins, and still has them today, he would have lost close to half-a-BILLION dollars between November 2021 and today, given that Bitcoin has lost more than two-thirds if its value in the past eight months.

Yet when he tried to sell those bitcoins back in 2010, he wanted $50 for them, thus valuing them at just half a US cent each, but couldn’t find a buyer willing to meet his price.

Heck, bitcoins could plunge to as low as $100 each, and someone with BTC 10,000 that they’d held onto from the early days, when they were worth fractions of a cent each, would, on paper at least, still be a millionaire.

In on the ground floor

With stories like that doing the rounds, you can see why many people are desperate to buy into new cryptocurrency schemes, despite the regular and dispiriting stories of cryptocoin schemes that failed completely, costing their investors everything they’d paid in.

Cryptocurrencies scammers have even found credible ways to trick iPhone users into installing unofficial “test” apps, which aren’t vetted by Apple as keenly as software in the App Store itself.

The crooks seek you out on social network sites, notably on dating sites, work their way into a friendly relationship with you, and then pitch the fact that the app is still “in beta” as evidence that they’re giving you a “unique” chance to get in right at the start.

When everyone else joins the club, and the value of their “cryptocurrency” really takes off, then everyone is going to make lots of money, they’ll tell you…

…but those who got in really early will be extra-super-duper rich, just like the people who were into Bitcoin when it first began.

You may get regular “deposits” added to your account under the guise of dividends, bonuses and interest payments, and the crooks may offer you the chance to bring your close friends and family in on the “deal”, perhaps with a “commission” you can “earn” for doing so.

You may even be able to cash out modest amounts of your “investment” along the way, or get “payouts” and “spot bonuses” in a cash form, intended to convince you that the system is genuine, and not just a one-way street that never pays out.

In reality, those “payouts” come either from the money you’ve already put in yourself, or from the funds paid in by victims who joined after you.

That sort of scam is known to this day as a Ponzi scheme, after an early perpetrator of the scam called Carlo Pietro Giovanni Guglielmo Tebaldo Ponzi, better known as Charles.

All a pack of lies

Sadly, the whole thing is a pack of lies, as you’ll find if you decide to cash out your “investment”.

What happens next depends on the scammers, but typical outcomes include:

The Missing Cryptoqueen is accused of running a scam along those sort of lines, albeit without an iPhone app, allegedly operating what the FBI refers to above as “a purported cryptocurrency”.

Some of the henchpeople in the OneCoin crew have already been convicted of scam-related offences, including Mark Scott, a former equity partner at the law firm Locke Lord LLP, who was convicted in Manhattan Federal Court in 2019 for laundering about $400 million out of the scheme.

And Ignatova’s brother, Konstantin Ignatov, who allegedly took over the reins of the OneCoin empire when his sister dropped out of sight in 2017, was arrested at Los Angeles International Airport in March 2019, and subsequently admitted guilt on money-laundering and fraud charges.

If in doubt, don’t give it out, and that definitely includes your money!

Technical Support Scams – What to look out for
Celebrate World Wide Web Day: The Evolution of Web Safety
Develop a zero‑trust environment to protect your organization – Week in security with Tony Anscombe
Traffic Light Protocol for cybersecurity responders gets a revamp
How to check if your PC has been hacked, and what to do next